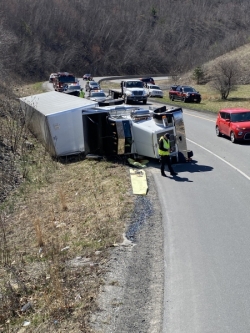 Shortly before noon Hanover Township Fire/Rescue was sent to the SB Route 29 on ramp to Interstate 81 NB for the report of a tractor trailer rollover. Fire Command, Rescue 5, and Engine 6 quickly wen...
Read more »
Water Rescue on the Susquehanna River
Tue. Jul 7th 2020 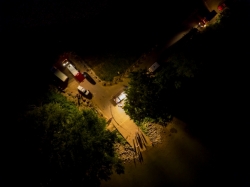 In the early evening of July 7, Hanover Township FD's Water Rescue Team was dispatched on the Primary Assignment to assist Plymouth Borough FD on the report of a person swimming in the river who w...
Read more »
Car strikes Tractor Trailer near Chewy Fulfillment
Tue. Mar 10th 2020 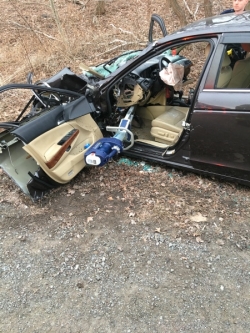 For the second time in as many days Hanover Township Fire and Medic 9 were dispatched for a 2 vehicle MVA with entrapment on New Commerce Blvd in the area of the Chewy Fulfillment Center. Units arrive...
Read more »
Entrapment Crash on the "Preston Stretch"
Mon. Mar 9th 2020 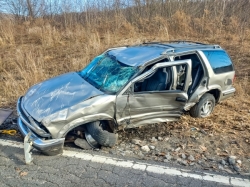 Hanover Township Fire and Medic 9 were dispatched to S Main St near the "Park and Ride" in the Preston Section of the Township for the reported 2 vehicle MVA, 1 vehicle rollover with 2 entra...
Read more »
Early Morning Rollover takes out Street Light
Sat. Dec 14th 2019 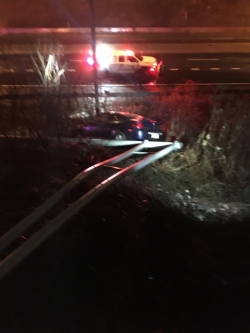 In the early morning hours of December 14 , Hanover Township Fire/Rescue and Medic 9 were sent to the vicinity of the Route 29 Highway overpass to the Sans Souci Parkway for a report of a vehicle roll...
Read more »
News Headlines
Engine 3 placed into Service
Sat. May 15th 2021 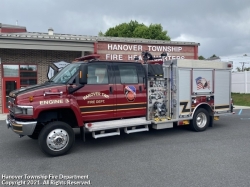 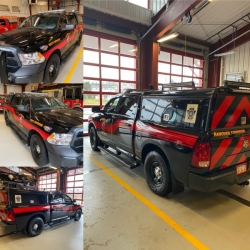 The HTFD is starting off 2021 on a high note. With assistance from Hanover Township Manager Sam Guesto and the Hanover Township Board of Commissioners we are proud to announce the acquisition of a new...
Read more »
Hanover Township hires new Full Time Firefighter
Wed. Sep 23rd 2020 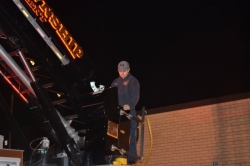 After the hiring process was halted due to the COVID-19 pandemic, things are finally starting to get back to normal and on track. This past week the Hanover Township Board of Commissioners have voted ...
Read more »
HTFD receives donation from Jr. Fire Chief
Thu. Jul 23rd 2020 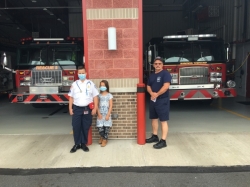 The Hanover Township Fire Department would like to extend a special thank you to Jr. Fire Chief Brian Lyons. Brian stopped by Fire Headquarters with an un-expected donation to our Department. For thos...
Read more »
Flag Thefts from Fire Headquarters
Thu. Jul 9th 2020 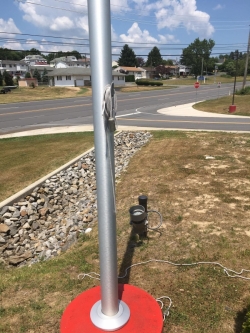 Between 2330 hrs on July 8 and 0030 hrs on July 9 unknown persons vandalized the flag pole area and stole an American Flag and a Black and Red Firefighter Memorial Flag that was flying in honor of a r...
Read more »
News
Hanover Area Fire District Announces Administrative Officers for 2020

81 entries in the News

Engine 3 was acquired from the Sugar Notch Fire Co. as part of an intra-governmental agreement for Fire Protection services with the Borough of Sugar Notch and the Sugar Notch Fire Co. Engine 3 will be our Primary RIT (Rapid Intervention Team) response vehicle and will serve as a primary response vehicle for various other emergency responses. Engine 3 is equipped with 6 Scott SCBA's, a compliment of Hurst Hydraulic Rescue Tools, as well as other front line firefighting equipment. Engine...

The HTFD is starting off 2021 on a high note. With assistance from Hanover Township Manager Sam Guesto and the Hanover Township Board of Commissioners we are proud to announce the acquisition of a new Fire Command/Duty Officer response vehicle. A new 2020 Dodge Ram 1500 Classic SSV is being placed into service. The vehicle was purchased through the COSTARS program from New Holland Auto Group - Commercial and Fleet Vehicles with upfitting completed by 10-8 Emergency Vehicle Service. Ass...

After the hiring process was halted due to the COVID-19 pandemic, things are finally starting to get back to normal and on track. This past week the Hanover Township Board of Commissioners have voted to appoint current Department Fire Lieutenant Tyler Gavlick as the newest Full Time Firefighter within our Department. Tyler is currently a Fire Lieutenant within our Department and is a Nationally Registered EMT and Pro-Board Firefighter 1. Best of Luck Tyler!

The Hanover Township Fire Department would like to extend a special thank you to Jr. Fire Chief Brian Lyons. Brian stopped by Fire Headquarters with an un-expected donation to our Department. For those that do not know Brian, Brian is an outstanding young man who is doing great work in raising funds for his community , fire department, and non-profit organizations to make a much needed difference. With funds raised by Brian, Elm Hill Hose Co. # 3 in Plymouth Borough were able to purcha...

Between 2330 hrs on July 8 and 0030 hrs on July 9 unknown persons vandalized the flag pole area and stole an American Flag and a Black and Red Firefighter Memorial Flag that was flying in honor of a recently deceased member. The American Flag measures 5 x 9 and the Memorial Flag is a 3 x 5. Any persons with information on the theft are asked to contact Hanover Township FD Headquarters at 570-371-3888 or the Hanover Township Police Department at 570-825-1254. All information will remain&nbsp... 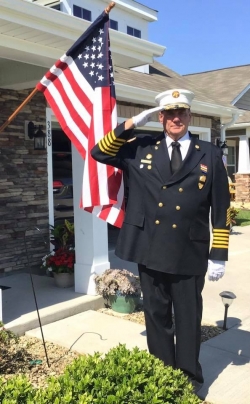 With the passing of Chaplain / Firefighter Joseph Nealon Jr. a huge void has been left in the backbone of our department's operations when it comes to ceremonial event's, parade's, and memorial services.  Part of Joe's role as Chaplain was to assist the Department's Honor Guard  as Dress and Drill commander with performing their duty at these types of events, and was the voice behind our memorial prayers . Joe was also a self made cadence caller when our d...

Hanover Township Fire DepartmentInformational ReleaseMarch 26,2020We wish to take a few minutes of your time in regards to the COVID-19 issues that our community is currently faced with.Your Fire and Rescue Department with support and teamwork from the Township Administrator Sam Guesto, Township Commissioners, Township Municipal Staff, Department of Public Works in addition to our Medical and Police Services is confident that the hands on measures and operating procedures we have in place will p... 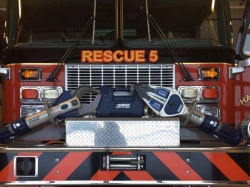 Through assistance of grant funding the cache of Hydraulic Rescue Tools on Rescue 5 is receiving an upgrade. With an increased number of vehicles on the road consisting of new technology and our Department responding to over 300 Motor Vehicle Incidents in 2019, our Department has recently purchased and are putting into service a compliment of Hurst E-Draulic Rescue tools onto Rescue 5 to increase our capabilities! A special thanks to MESFire and John Sileski, and for the expertise and assistance... 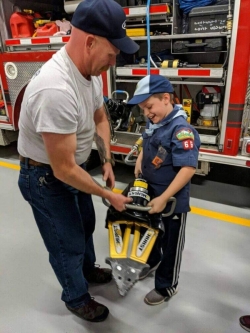 Cub Scouts from the Hanover Township Boy Scout's Troop visited Fire Headquarters for a presentation put on by FF/EMT S. Reilly. Cub Scouts learned the importance of community volunteerism and had an up close and personal demonstration of the life saving and state of the art equipment housed at Fire Headquarters. 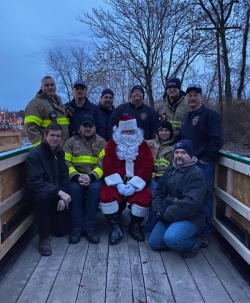 The holiday spirit was out in full force tonight as the Hanover Township Lion's Club held their annual tree lighting ceremony tonight along West End Rd.  Members of the Hanover Township Fire Department escorted the Jolly Old Fellow atop one of our fire trucks and joined other community organizations in spreading holiday cheer to all in attendance! A great time was had by all! 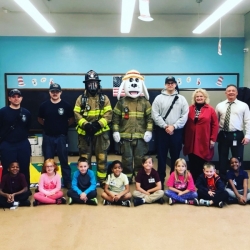 Hanover Township Fire Departments Fire Prevention Division under the direction of Lt. Chris Halecki rounded out fire safety month at the Hanover Green Elementary School. Kindergarten and 1st Grade students of the school received fire prevention and safety presentations from HTFD firefighters to assist in keeping them safe during emergencies and situations involving a fire. This October the Fire Prevention division provided presentations to 900 plus students throughout several events at Hano... 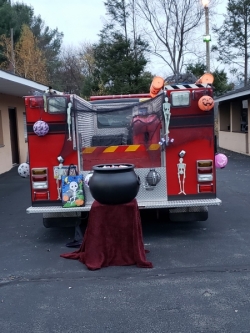 The Hanover Township Fire Department was out and about nearing this Halloween of 2019 and with many community events a great time for the Department to get out and mingle with the community and children we serve. The Hanover Township Water Rescue made an appearance at the Trunk or Treat event held at Holy Cross Church in the Buttonwood Section of the Township and a great time was had by all in attendance. A special thank you goes out to Father Cirba and the rest of the Holy Cross Church mem...

from ESI Equipment ...The responders at the Indianapolis Fire Department were dispatched to the aftermath of a high-speed crash and resultant fire involving a battery car with the highly volatile batteries exposed. The lessons learned from the aftermath of that crash is information that all rescuers need to know as the popularity and number of battery vehicles increases…5 Reasons Why Your Department Members Should Attend:The popularity and number of battery vehicles on the road today... 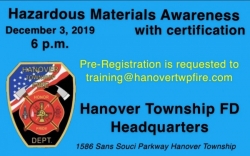 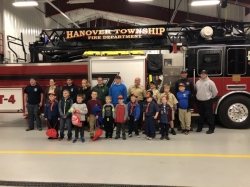 Various levels of Scouts from Troop 55 of Wilkes Barre, PA visited Hanover Township Fire Headquarters for demonstrations on equipment and fire safety. The Scouts and Scoutmasters were on hand for an approximate 1 hour presentation given by Career and Volunteer Staff on the equipment we utilize, tactics and procedures for operations, and fire safety.  Thank you to Troop 55 for your interest and attendance at the presentation.

Blue Mass at Exaltation of the Holy Cross Church 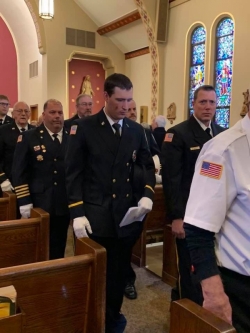 Members of the Hanover Township Fire Department from past and present, as well as members of the Ladies Auxiliary attended the annual Blue Mass held at the Exaltation of the Holy Cross Church in the Buttonwood Section of the Township.  Every year the Blue Mass is held to honor and pay respects to members of the fire service who have passed on after a lifetime of dedicated public service, whether it be in the fire service , emergency medical services, or law enforcement. This years Blue...

Read more »
Fun for All at Annual UFCW Community Picnic 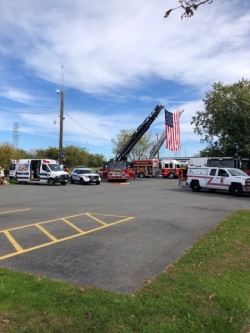 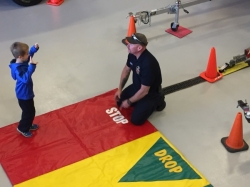 The Hanover Township Fire Department hosted tours for students of the Hanover Area School District. Students from the Lyndwood Learning Center Pre-K and the Hanover Area High School's Life Skills class were provided tours of Fire Headquarters and our equipment by Firefighter Sean Reilly as the lead presenter. Students learned the about fire apparatus , equipment, and personal protective equipment. As well as several techniques such as "Stop,Drop, & Roll" , The importance of smo...

81 entries in the News

We are in the process of updating our database with emergency contact information for Hanover Township and Warrior Run Borough Businesses. So adequate notification can be made if an emergency were to occur at a business you own or manage! Please complete the form below and mail or scan and email the form with the directions provided.

Some dates are still available for the remainder of 2020.

Hall Rentals can also be made for 2021 dates

by calling 570-825-1267 and leaving a message for the Hall Manager regarding your prospective date.

Are you interested in becoming a member of our team?

The Hanover Township Fire Department is always accepting new members into our ranks.
To obtain an application for membership stop by

In order to become a member , individual must successfully pass a criminal background check and PA child abuse and safety clearance. You do not have to have any prior firefighting or EMS experience.

Training will be provided. 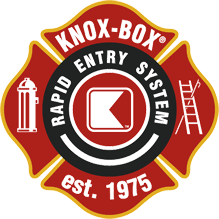 The KNOX-BOX Rapid Entry system is specifically developed for fire departments. By using a master key, the fire department can gain access to commercial and residential properties.
The KNOX-BOX system allows property owners of both commercial and residential  to store keys, USB Flash Drives, and other floor plans in high-security lock boxes mounted near their building entrances or at specific locations in the facility or home. The lock box is keyed specifically to our departments master key. With the Knox System, the fire department does not have to wait for a property owners  to respond to  unlock a door in the middle of the night, and it alleviates the fire department in having to  force the door open to gain access. The Knox Rapid Entry System reduces property damage, access time and liability for lost keys.

FollowTweet
Copyright © 2006-2021. YourFirstDue Inc. All Rights Reserved. Designated trademarks and brands are the property of their respective owners. Content on this web site is supplied by Hanover Township Fire Department. YourFirstDue Inc. cannot be held responsible or liable for any content, text, pictures, or any other media found on this web site. Maintained by the members and staff of Hanover Township Fire Department.
Management Login
Powered by